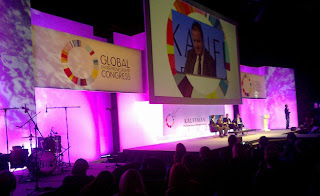 It was uplifting seeing the different ideas around which schools had created businesses.
Sat with Mike Parker Chairman of Liverpool Vision, he was very interested in Pink Shoe NW, had a great chat and we both bought products from young entrepreneurs – a book about Liverpool from a 7-year old from Rice Lane Infants School and a Snow Globe from Anfield Infant School – Childs Eyes on Liverpool. Two teenage Entrepreneurs, Ryan and Thomas who run Red Line Events, invited me to their 'Mocktail Party' at The Albert Dock with Miss UK. Met with some of the judges including Peter Avis who runs Babylon at Kensington Roof Garden for Virgin. All inspiring, and a very difficult to job for the judges!
Day 2 was the big event at the Arena & Conference Centre. Hearing the many speakers and meeting so many entrepreneurs was a real buzz. And I was one of many tweeting key ideas throughout the day.
Just a few of my personal highlights… 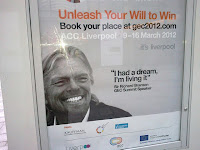 Richard Branson talking about the Elders, making a difference and using wisdom and experience.  World leaders such as Desmond Tutu, Nelson Mandela and Jimmy Carter sharing ideas to solve world problems. "Its not just about making money... it’s about teaching people to create as well as doing good".
That’s our take on business – its not just what you do in the business but how you impact the community and the wider world. Everyone got excited about Virgin Galactica too!

Very energizing to see the prizewinners from the schools competition – Rice Lane Infants School and Parklands High School for their T-Shirt range.
Terry Leahy told us that most young people should see themselves as entrepreneurs, but fewer than half do anything about it. He also talked about the importance of entrepreneurial thinking inside organisations, and some of the ideas developed within Tesco and from people coming out of big companies. Terry said you have to show courage and take personal risks, then you can change things both within an organisation and as an entrepreneur.
Acting on belief and being bold made the difference to the business.  ‘ A dream is just a dream if you don’t pursue it’. Very ‘Pink Sky’ Thinking!
Michael Heseltine said its vital to do what you enjoy – find something that makes you look forward to Monday mornings! He also admitted that luck pays a part.Talked about the public sector and how it could become more entrepreneurial. That the sheer scale of budgets meant Ministers are encouraged to look only at the big picture, but as in all small businesses often it’s the detail that counts.
Deborah Leary was inspiring, saying business is all about the people. She said since the recession people want to collaborate more, her company is working in more partnerships and there’s more energy in the market.
Martha Lane Fox agreed it was about working together, she could have done it on her own but so much stronger working with a good team. She said, there’s so much brilliance out there – harness it! 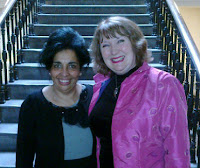 Met so many amazing people, touching base with friends and colleagues such as Alison Ball of Arup who were sponsors for GEC, along with Clare Dove of Blackburne House, Prof Julia Hausermann founder of R&H,  Barbara Cheyne of Scottish Power, Val McKie of Magma Effect, Julie McKenzie of Liverpool Vision, Mariam Al Mannai from Young Arab Leaders who travelled from Bahrain for the GEC. (She is hoping to come back to Liverpool for our Pink Shoe North West Interprise Forum in June) Rawand Madi from Queen Rania Center for Entrepreneurship in Jordan and many business owners.
Finally, I was pleased to hear the vision for Liverpool. A ‘smart’ city – looking 20 or 30 years to the future, to build on the vision for a green and global city! Met 'John Lennon' of The Back Beat Beatles on my way out…
On Wednesday I was on the Fringe – first of all at Blackburne House with the wonderful Clare Dove for the Social Enterprise in Action festival. Café conversations on all aspects of enterprise with entrepreneurs from Construction to Health & Wellbeing, lots of wonderful businesswomen, even a singing entrepreneur…Bernadette Whelan of Crescendo who enrolled the room into an impromptu singing experience so that everyone left smiling and uplifted!
In the evening it was the Women in Business Mastermind, chaired by the extraordinary Jeanette Kehoe-Perkinson with an array of wonderful women including Anna Heyes MD Active Profile, Deborah Leary Forensic Pathways, Deborah Blisson, and Bev of YTKO. It was great to hear from Carrie Green who started her first business at 20, and Anna Hayes, young Entrepreneur of the Year who works with young girls to inspire more to become entrepreneurs.
Deborah believes we must change the language, barriers are just challenges and if we go into something with the mindset it’s a barrier then it will be one! We heard about twitter too – she has 4 accounts but warns to be careful, she recently got hacked by a porn site… (having had problems tweeting that evening this was timely to hear)
Also had some good advice on employing people, or rather not employing them but outsourcing instead.
Bev said ‘cashflow is more important than your mother!’ The entire panel agreed that keeping a close eye on the money is vital. We also heard that although funding can be tough, prepare properly and you’ll get the finance.
Bev also relayed that in science and technology there is still a majority of men, a field in which she is clearly successful and she had some very visual and amusing ideas about how to succeed in a male-dominated world! Stuart Morris who travelled from Henley University courageously joined the debate on behalf of the gentlemen present!
It was also agreed that networking is a good tool towards success, and of course at Pink Shoe Club we endorse that!
Delighted that Deb Leary is interested in PSC projects we have planned for June and beyond, as are Anna and Cary. Stuart suggested being an ambassador for women and showed me a picture of his wife’s fabulous pinky/purple wedding shoes! I invited him to join Pink Shoe Club - Hurray for Stuart! Jeannette Kehoe Perkinson did a fantastic job and Maggie our host created a lovely entertaining evening!

On Friday we were at the Museum of Liverpool, then at 'The Light' in another iconic landmark, the Liver Building.

Thank you all and thank you Liverpool!
Email ThisBlogThis!Share to TwitterShare to FacebookShare to Pinterest

Marvellous Mavericks Tea at the House of Lords

To celebrate International Women’s Day the Pink Shoe Club Roll of Honour 2012 was announced with an afternoon tea in the House of Lords, hosted by Baroness Morris of Bolton & Helene Martin Gee along with many fabulous members and friends.
This year Pink Shoe Club recognised innovative women who are inspiring role models and also brave enough to be individual. We sought women with brio, who were different from the crowd not only due to their achievements but their lifestyle, character and personality.
Helene said: On the eve of the 101st International Women's Day, we're marking the occasion by honouring women from around the world. Last year we chose 100 remarkable women, 10 from each decade, to mark the centenary. There were many we wished to include but simply didn’t have space.
So Pink Shoe commemorates IWD by celebrating women with its Annual Roll of Honour, each year a different theme. For 2012 we chose Marvellous Mavericks. Women with chutzpah, women who truly break the mould. Interestingly, when the research team looked into Marvellous Mavericks it discovered there is no Wikipedia page for ‘Eccentric Women’ - its time to start one!

The list is international and spans history to the present day.There are many English women included – perhaps eccentricity is something we do well!  We've been delighted to receive nominations of women who are not already well known.

I’m thrilled we have with us Cate McKenzie and her mother Tina McKenzie. Cate nominated her grandmother Hazel Adair (right). Truly a 'Marvellous Maverick'. Amongst other things Hazel helped invent soap operas and wrote the world’s first interracial screen kiss.
Helene went on to say that whilst celebrating eccentricity we're also celebrating genius. She quoted from Edith Sitwell: Eccentricity...is a kind of innocent pride. The genius is regarded as eccentric because s/he is unafraid of and uninfluenced by the opinions and vagaries of the crowd…
Helene explained.. “By some definitions there are 18 components, we’ve chosen to highlight three – nonconformist; curious; mischievous. These are some of the traits our Marvellous Mavericks display, and essential to success, whatever century or country we live in".

The room was in absolute silence to watch the powerful roll call of women from history. Helene then asked the group to recommend other women to include in the list. Postcards were handed out and some of those nominated added to the Roll of Honour, others will be featured in future lists.
Kenteas Brine shared thoughts on her twin sister, who sadly died last year. An extraordinary woman who touched many lives. Not only a successful sculptor and professional with a wonderful family, she set up her own charity in India. Helene said this is exactly whom we were celebrating, the woman who has many aspects to her life and lives each one with gusto!

At 3.30 we moved into the Attlee Room for a splendid afternoon tea and networking. As ever, Lady Morris was a gracious host, saying she loves Pink Shoe events, as the energy in the room is always so high and she meets so many interesting women!
Remarking that the words on the web site say it all... Pink Shoe Club connects women of influence to explore ideas, business and opportunities… An alliance of diverse, modern leaders who have a passion for their own lives and for encouraging and effecting positive change.

Lady Morris certainly displays these characteristics, and went on to say that when responsible for political candidates she saw the many differences between people, and the more engaging, broader approach women take "it’s important for us to work alongside men to achieve the greatest success".
Trish explained she had intended to wear more pink as per the dress code, and hoped her subtle salmon pink scarf was sufficient! We all said she looked lovely and it fitted the bill admirably.

Lady Morris then talked about all the great activities celebrating International Women's Day around the world and that we should spare a thought for women who weren’t able to enjoy the same freedoms and life choices we were fortunate to have.


Guests were served prosecco, and Lady Morris called for a toast. We raised our glasses to Marvellous Mavericks and to each of the women present, as well as those women unable to share our celebrations.

The event was another success for Pink Shoe and it was great to welcome some wonderful new members. Guests were reluctant to leave as they continued sharing conversation along the corridors of the House of Lords.
We were all very happy to receive a going-home gift of a scrumptious Cake Pop, created specially for Pink Shoe Club by Ling Tyler-Bennett and her new venture 'Sweet Success' yum yum!
Email ThisBlogThis!Share to TwitterShare to FacebookShare to Pinterest
Newer Posts Older Posts Home
Subscribe to: Posts (Atom)

Pink Shoe is an influential and innovative business network that works to positively impact life-long development of women.
Members are an eclectic mix of high-ranking professionals - women and men encompassing Government, industry, academia, entrepreneurship, the arts, public service and third sectors.
Its special focus on entrepreneurship and women business-owners includes working in partnership with key Parliamentary groups to generate a range of vibrant and interactive events connecting prominent and emerging entrepreneurs, and young people of all backgrounds.Alongside this Pink Shoe creates unique programmes to encourage more women and under-represented people to enter public life.