At the House of Commons we heard from many Parliamentary supporters of Parliament Week, which is on track to deliver the biggest and best selection of events ever in 2013.

As a Partner in both the Women & Democracy and Business & Enterprise categories, Pink Shoe Club has a number of events lined up for Parliament Week, both in the week itself which starts on November 15th, and during December. 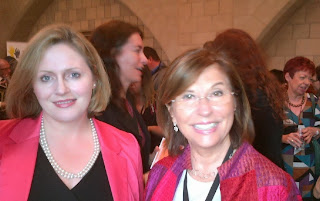 We were welcomed by the Lord Speaker, Baroness D’Souza who stressed the importance of engaging with as many people as possible.

Lady D’Souza said that welcoming young people into Parliament is one of the most enjoyable parts of her role. 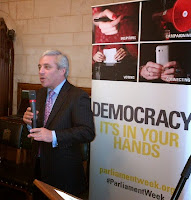 Then Mr Speaker addressed the crowd, enthusiastically praising this year’s topic of Women and Democracy. Mary Macleod MP spoke warmly of how glad she was to see so many partners present and that she looked forward to an exciting week. We were especially delighted to hear this as Mary will open our own international conference in December!

There was then an opportunity to mingle and meet other Partners, as well as time to enjoy a sumptuous array of homemade cakes!
Email ThisBlogThis!Share to TwitterShare to FacebookShare to Pinterest

The latest Enterprise Forum roundtable was held at the House of Lords in partnership with the All-Party Parliamentary Group for Entrepreneurship and the Enterprise Research Centre. 'Turning fast growth into a habit – policy and finance reports'. 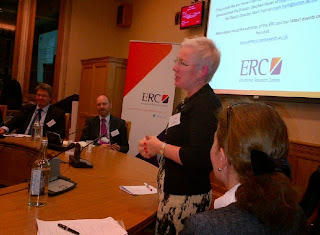 Delegates were welcomed by APPGE Chairman the Earl of Erroll.

Professor Stephen Roper and Professor Mark Hart then presented their research fndings and started discussion on one of the ERC ideas - a National Growth College.

Sue Lawton then led the interactive and absorbing debate with many interesting points raised by delegates, especially Lorely Burt MP, and Anne Marie Morris MP who asked how this would impact on micro business. A full report is to be published by the APPGE. 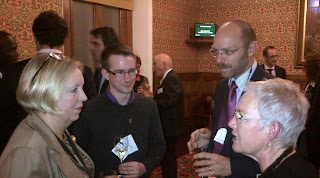 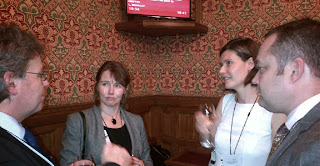 At the reception afterwards the discussions and networking continued.

After the success of Pink Shoe's summer lunch programme, the intimate Founder’s lunches are proving very popular so will continue throughout the season. With numbers kept at no more than 8-10, all guests are able to get to know each other in the smaller group.

Recently we spent a lovely Friday lunch sharing tasting platters at the Adjournment in the House of Commons with a great mix of long standing ambassadors and some fabulous potential new members.
Email ThisBlogThis!Share to TwitterShare to FacebookShare to Pinterest

The first meeting of the proposed Pink Shoe Foundation was held at Westminster. The charity will aim to encourage and support the lifelong development of women via a range of activities.

The first three Trustees are all founder members of the Club. Vanda Green, Úna McBride and Ling Tyler-Bennett, along with PSC founder Helene Martin Gee and Senate Chairman Jill Pay, have identified the first project to help fulfil the club's maxim of 'Creating Positive Footprints'.

PSF kicks off with a role model reinforcement project: ‘Take a Walk in My Shoes’. This is the Pink Shoe Shadowing Scheme for Women in Public life. It will involve a practical shadowing experience, with women wishing to contribute to public life shadowing those already in such a role, especially Ministerial Public Appointments. The shadowing is then supported by a series of workshops providing training and development for participants. The scheme will be launched at the House of Commons in November as part of PSF’s partnership with Parliament Week.
Email ThisBlogThis!Share to TwitterShare to FacebookShare to Pinterest
Newer Posts Older Posts Home
Subscribe to: Posts (Atom)

Pink Shoe is an influential and innovative business network that works to positively impact life-long development of women.
Members are an eclectic mix of high-ranking professionals - women and men encompassing Government, industry, academia, entrepreneurship, the arts, public service and third sectors.
Its special focus on entrepreneurship and women business-owners includes working in partnership with key Parliamentary groups to generate a range of vibrant and interactive events connecting prominent and emerging entrepreneurs, and young people of all backgrounds.Alongside this Pink Shoe creates unique programmes to encourage more women and under-represented people to enter public life.